Pruddentown Historic District is located on Mount Kemble Avenue, off Route 202, and just south of Morristown.

Joseph Prudden (1693-1776) settled in this section, known as Mount Kemble, about 1740. Prior to 1769, he operated a pottery manufacture or brickyard here. His descendants carried on until 1857, when Silas Armstrong acquired the business that would survive until 1906.

Many buildings in this neighborhood were constructed of local brick. One was the 1810 Mountain School, the oldest surviving schoolhouse in the township, attended by local children until 1914.

The district is notable for a 19th century African American community which had acquired land from the slave-holding Kemble and Doughty families or arrived later to work in the brick factory. 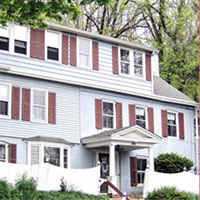