Create an Account - Increase your productivity, customize your experience, and engage in information you care about.

Alnwick Hall is located on 355 Madison Avenue and Canfield Road.

One of many elaborate houses that once stood along the stretch of Madison Avenue known as “Millionaires' Row,” this survivor of the Gilded Age was built for Edward P. Meany (1854-1938), New Jersey Judge Advocate General and director of the American Telephone and Telegraph Company, and his wife Rosaline.

The Meanys based their 1904 home on the design of Alnwick Castle in Northumberland, England. From 1961 to 1984 the structure served as Saint Mark’s Lutheran Church. Today it is an office building known as “The Abbey.” 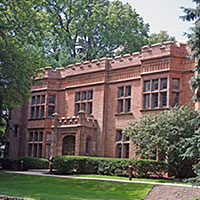